Convened by Cross-border Information’s CbI Meetings, in partnership with Nairobi-based Africa Assets and global law firm King & Wood Mallesons SJ Berwin, two distinguished panels and an expert audience of around 80 met in London to debate the extent to which PE investors had appetite for large- scale infrastructure investment across the continent.

CbI chairman Jon Marks and King & Wood Mallesons-SJ Berwin partner and co-head of energy and Infrastructure Neil Upton led the lively discussion under the Chatham House Rule, following a presentation of trends by Africa Assets director Andrea Bohnstedt. Her detailed overview of private equity investments in Africa during 2013 showed a significant increase from 2012, with the upward trend expected to continue. A summary of the 2013 data review is available to download here and the full copy can be obtained from info@africa-assets.com. 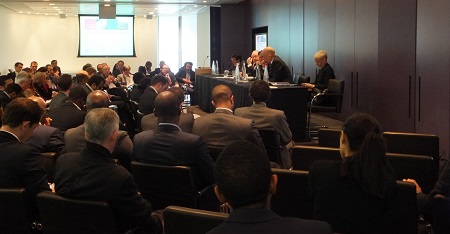 Key points raised at the meeting:

• PE needs a louder voice to be better understood in Africa – not least to underline the development impacts of private investment, which benefits communities as well as shareholders.
• The outlook for private sector investment in Africa is bright, highlighted by increased flows of capital from non-traditional sources, which may be much greater than many realise.
• A raised profile for private investment is expected as deal flows speed up.
• The extent to which ‘blending’ of public and private finance is necessary for energy, transport, ICT and other projects was a key theme.
• Participants underlined the importance to many big projects of substantial support from development finance institution (DFI) and other public bodies. This was highlighted by the line-up of institutions in the financial close of the Lake Turkana wind power project in Kenya, which provides a model for renewables schemes.
• Participants debated the extent to which PE investors had appetite for large-scale infrastructure investment in Africa, especially if those investments lacked significant DFI input to mitigate risk and soften financing costs.
• It was generally agreed that allocation of risk among stakeholders often remains a problematic issue in African deals.

• The big, more open economies of Kenya, Nigeria, Morocco and South Africa continue to dominate, but PE investors are increasingly venturing beyond, particularly in East Africa.
• North of the Sahara, a number of players have established themselves in Morocco, benefitting – as in South Africa – from a major renewable energy programme. It was noted that investment portfolios are diversifying as extractive industries begin to lose their stranglehold on foreign private investment and investors discover the opportunities presented by a growing middle class.
• Much interest has been generated by the potential for ICT investments, especially as Kenya markets itself as the ‘Silicon Savannah’, although the deal flow to date is limited.
• Reflecting both growing consumer demand and one of Africa’s traditionally largest economic sector, interest in agribusiness and related deals is also rising.
• Ethiopia’s large market and high GDP growth rates draw both PE and direct investors, but conditions on the ground mean that deal making is still slow and difficult, so the strong interest has not yet translated into a steady rise in deals.

• Investors highlighted the continuing challenges confronted by energy and infrastructure developers – which range from the tendency of investors and contractors to pull in different directions to business partners falling foul of corruption allegations.
• Through ‘operational risks’ such as corruption, investors face significant reputational risks; it is therefore important that key decisions are taken which can be defended five years down the line, highlighting the necessity to carry out enhanced due diligence on project partners.
• Lead times are often very long and costly, given the complexity of projects and new territories of co-operation between governments, private sector players and DFIs.

• The panel was unanimous in calling for other investor groups to become involved in parallel with PE – notably African pension funds, which have played little role to date in infrastructure investment and private equity in general. Other potential sources of funds include family offices and debt funds.
• There was consensus that DFIs would remain indispensible players in sub-Saharan Africa for the foreseeable future, but sustainable long-term investment required a step away from dependency on DFIs and the creation of domestic development institutions.
• The public/private model of investment typical of African infrastructure schemes has established a model some PE practitioners may not consider to be true private equity. Unlike investing in countries with more mature commercial sectors, it was argued that getting involved in deals early to help shape them from the start was crucial.
• The meeting called for a reduction of direct aid and grants to government and a focus from the G8 on support for private enterprise.

• Investors tend to focus on internal rate of returns (IRRs), which are hard to judge in African deals due to the relatively small number of exits to date.
• Africa was described as a leader in ‘impact investing’, and more recognition of what private equity investments can contribute – company growth, employment, backward and forward linkages in the economy – would create greater awareness for this form of capital and its positive impact.
• PE funds can help attract more debt capital as well as strategic investors. However, unless PE can show commercially interesting returns, it will not be able to attract large-scale commercial funds that will eclipse the limited pool of DFI money.