Egypt's President Abdel Fattah El-Sisi's promise to keep the lights on in Cairo has seen the former military general give the green light to a wave of new electricity generation projects. However, analysis by CbI’s African Energy suggests that if all the proposed new generation projects being planned or developed by the government, its various agencies and private sector partners are implemented, they will significantly exceed the capacity the country needs and can afford by 2020.

The implementation of only the most likely generation projects could take installed capacity to approximately 33% above the peak demand forecast for 2020, which is well beyond even the generous 27% upper limit of the government’s target reserve margin. 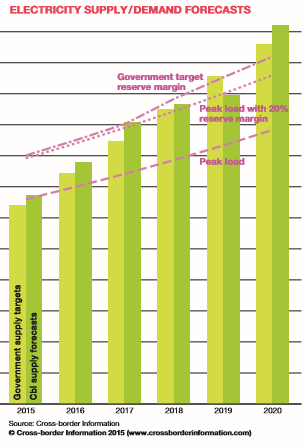 Energy sector developments are based on credible plans to accelerate upstream gas field developments in the near term following a recent decline in production. The largest quantities of extra gas will come from deep-water offshore projects operated by BP, Eni and BG off the Nile Delta, with smaller contributions coming from DEA Group, Dana Gas, Edison and Royal Dutch Shell onshore (AE 298/18, 297/21, 296/17).

However, there is little consensus among analysts about how much gas output is likely to increase. One problem that makes forecasting likely outcomes for the energy sector particularly difficult is that there is little consensus even on the present situation and its fundamental dynamics. The Ministry of Petroleum has told Egyptian media that production is still declining, by an even greater amount that the International Energy Agency’s estimate.

Despite some other consumers of gas turning to relatively cheap imported coal, African Energy’s analysis of the sector expects there to be a significant gas supply shortfall by 2020, even if installed electricity capacity meets the initial government targets rather than the more optimistic heights following the signing of a number of large projects at March’s Sharm El Sheikh Egypt Economic Development Conference, meaning Egypt's current reliance on imports of LNG will have to continue for the foreseeable future*. 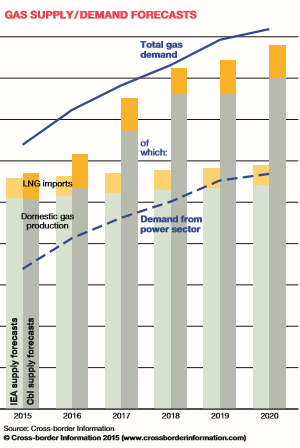 *Note: Eni's significant gas find in August 2015 radically alters the future of Egypt's power and gas supply/demand balance. Please contact us if you would like to know more.