The Infrastructure Consortium for Africa (“ICA”) has published its Infrastructure Financing Trends In Africa 2013 annual report, which finds that, for the second year running, there was a significant rise in total commitments for energy, transport, water and information and communications technology (ICT) in 2013. Results were reported by ICA members and from research carried out by Cross-border Information (“CbI”), which acted as consultant to the ICA Secretariat, into other public and private sector funding flows.

ICA members – the G8 countries, South Africa, African Development Bank, Development Bank of Southern Africa, European Commission, European Investment Bank, and the World Bank Group – reported 2013 commitments up 35% compared with 2012, reaching a record level of $25.3bn. The increase has been substantially helped by $7bn of commitments by US government agencies in US President Barack Obama’s Power Africa initiative. The signs are that the rise in commitments has continued in 2014 as ICA members have lined up to support initiatives including Power Africa.

Commitments from the private sector, non-ICA members including China, India, the Arab Co-ordination Group of funds and institutions, and other European countries contributed to total external funding commitments of $52.9bn in 2013, reinforcing a trend of growing support for Africa’s infrastructure, which recorded $34.3bn and $46.6bn total external funding in 2011 and 2012, respectively.

The report indicated sustained growth in African national governments' spending on infrastructure. In the African countries for which data was obtained, while overall budgets increased by 3% in the 2011-13 period, budget allocations for infrastructure increased by 8% in the same period. 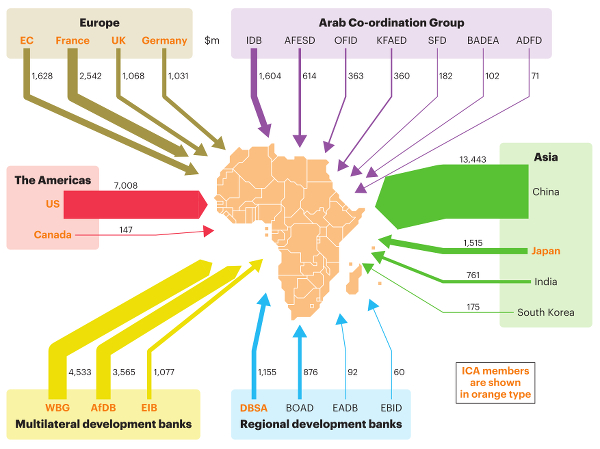 ICA members’ disbursements (which cannot be compared directly to commitments in the same year) reached only $11.4bn, 11% lower than reported in 2012. The annual report said: “ICA members identified the enabling environment as the biggest challenge in project preparation, including ensuring the right attitudes, policies and practices with stakeholders.” Critical issues included determining a project’s financial structure.

Respondents to ICA’s now annual Private Sector Survey (compiled by CbI) listed the slow pace at which DFI-led facilities disburse funds among the major constraints on implementing projects. “It seems that the public and private sectors share similar frustrations when it comes to project preparation, a process which may eat up 7-15% of total project costs,” said CbI’s managing director, Mark Ford.

The report said: “The extent that international focus is shifting towards solving the problem of gaps in Africa’s infrastructure is underlined by the attention now given… by senior leaders. It is reflected in an ever-growing number of initiatives – from the innovative Africa50 fund to help underwrite commercial infrastructure projects developed by the African Development Bank and the African Union’s potentially transformative Programme for Infrastructure Development in Africa to the United States’ Power Africa initiative, a range of European Union programmes and funding from China and other non-ICA member states, plus the United Nations-led global Sustainable Energy for All initiative. As the report shows, Power Africa is making progress in meeting the initiative’s initial goals of increasing energy access in sub-Saharan Africa.”

The ICA has created a Project Preparation Facilities Network with the aim of better co-ordinating schemes and their potential donors during the difficult early development stage. Respondents to the private sector survey highlighted the lack of early-stage funding as a key barrier to market entry. The report noted the launch of new early-stage project development facilities by a partnership of Dutch DFI FMO and the Lagos-based Africa Finance Corporation, and the African Sustainable Energy Facility, which “may prove to be useful tools”.

African states are themselves looking to provide more resources to finance infrastructure projects. The report said “national budget allocations… appear to be growing but investment levels vary substantially from year to year in several countries”.

China remains the largest bilateral investor in infrastructure on the continent. Lending reached $13.4bn in 2013, almost the same as in 2012, although somewhat less than in 2011, and all directed at sub- Saharan Africa.

Private sector interest is growing, spurred by a handful of large-scale initiatives such as South Africa’s renewable energy programme. The private sector survey found that most investors were looking to an internal rate of return of between 16% and 25%, and anticipated that their African infrastructure portfolios would expand over the next five years.