The Infrastructure Consortium for Africa’s annual report, researched and produced by Cross-border Information, points to positive trends in financing for energy and other critical sectors across the continent. But while public donors and private investors are keen to buy into more deals, implementing cross-border mega-schemes is more difficult

The Infrastructure Consortium for Africa (ICA) reports that out of the four sectors it analyses – energy, transport, water, and information and communications technology (ICT) – transport operations attracted the most financial commitments ($34.5bn) of any sector in 2014, taking all sources of finance into account. This was largely due to $17.6bn in national government budget allocations and the $8.4bn of investment certificates for Egypt’s Suez Canal expansion. Among ICA members, which include leading national and multilateral donors, the energy sector received more commitments than any other sector in 2014, when ICA members committed $9.2bn out of the $22.4bn committed to the sector from all sources of finance.

Public and private sector operators expressed concern about the slow progress of major regional projects, notably the Programme for Infrastructure Development in Africa (PIDA) and its Priority Action Programme (PAP). Many operators see smaller schemes and new commercial models as the way to provide power to hundreds of millions more consumers across sub-Saharan Africa.

Participants at the First PIDA Week, organised by the New Partnership for Africa’s Development (Nepad) at the African Development Bank (AfDB) headquarters in Côte d’Ivoire on 13-17 November, criticised lack of progress. “All the focus is on the high-level political dialogue, with no real co-ordination between lower level groups who might implement these schemes,” said one frustrated official.

“We must recognise that policy-making is increasingly moving from a national to a regional level,” Nepad executive secretary Ibrahim Assane Mayaki said on 15 November. This can only be achieved by working with new private sector models and by breaking projects down into investible chunks, he argued.

Unveiling its annual report, Infrastructure Financing Trends in Africa 2014, the ICA Secretariat said a total of $74.5bn was committed last year to its four sectors of focus. This figure is based on reported ICA member data, identifiable commitments made by 42 African national governments, non-ICA member external public sector funders and the private sector.

This was less than the $99.6bn reported in 2013 (AE 290/19). However, the headline figure obscures some promising trends in support for energy and other infrastructure apparent since 2012 (AE 266/19). The reported downturn was largely due to a sharp fall in Chinese commitments, particularly for transport projects, from $13.9bn to $3.09bn, as recorded by ICA’s monitoring (AE 309/19). The 2013 figures were also skewed by the inclusion of an exceptional $7bn of commitments from US President Barack Obama’s Power Africa initiative, a slowdown in private sector commitments to the transport sector, and a more rigorous approach to reporting of central government budget allocations in ICA and other methodology.

The ICA’s bilateral and multilateral members reported total commitments of $18.8bn in 2014. Although this was less than the $25.3bn reported in 2013, it demonstrates a steady underlying trend: when the exceptional $7bn US contribution is excluded, their 2013 commitments totalled $18.3bn. The report comments: “On a like-for-like basis with reporting by broadly similar organisations, ICA members’ annual commitments for 2012-14 respectively were $18.7bn, $18.3bn and $18.8bn.”

More than 50% of the investors who responded to the ICA’s African Infrastructure Investment Survey 2014 said they would invest more in sectors in which they already participated, while 88% of energy investors said they intended to increase their commitments. However, private sector investments focused on just a few large-scale projects in 2014, “while participation in regional projects appears too challenging for most private sector investors and developers”, the report said. Survey respondents said Kenya and South Africa provided the most favourable investment locations, followed by Nigeria.

A critical problem raised by many developers, lawyers and other specialists is that of working with weak government departments and utilities. The Abidjan-based ICA Secretariat’s annual poll of private sector operators in African infrastructure sees them citing the usual “constraints such as bureaucratic delays, policy uncertainty, lack of transparency and insufficient institutional capacity”.

However, many private sector respondents and ICA members were even more preoccupied with “the shortage of adequately prepared or bankable projects [which] was a much bigger challenge than finding project finance”. These concerns are reflected in a growing number of initiatives and programmes to improve project origination, early-stage project development and financing, with the ultimate aim of increasing flows through the project pipeline.

The data recorded a very sharp decline in commitments to regional projects. High-level efforts to promote PIDA’s impressive roster of schemes are supported at institutional level by the African Union Commission, AfDB and Nepad, whose Nepad Planning and Co-ordinating Agency is PIDA’s implementing agency (AE 254/21). But deep-seated problems continue to stall progress towards implementing a majority of mega-schemes (AE 309/15).

Political, bureaucratic and other blockages mean few PIDA schemes have made significant progress over the past year. South Africa – expected to be the anchor client for the Inga III scheme in Democratic Republic of Congo – is looking to accelerate the project by establishing a dedicated technical cell in the Department of Energy, officials visiting Abidjan said.

Pointing to the complexity of cross-border schemes, the ICA – a strong supporter of PIDA – observed that overall regional infrastructure commitments declined to $1.8bn in 2014, from $4.2bn in 2013. Its members committed only $161m to PIDA/PAP schemes in 2014, compared with $1.3bn in 2013. This may reflect a pause following “the very substantial upwards drive of regional commitments in 2012 and 2013”. The amount disbursed by ICA members to PIDA/PAP projects declined from $688m in 2013 to $501m in 2014.

Among projects making progress, the ICA said, is the $469m Rusumo Falls transboundary hydroelectric power project, which is financed by a mix of multilaterals and bilaterals, with construction slated to begin in 2016.

Critics argue that governments are focusing on over-complicated mega-projects. Five showcase projects are included in the new PIDA Financial Structuring Plan: the Abidjan-Lagos Highway (parts of which have been built already by Côte d’Ivoire), the Zambia-Tanzania-Kenya power transmission line, and three energy projects that sceptics wonder will ever leave the drawing board: the Trans-Saharan gas pipeline, Batoka Gorge hydropower and Inga III.

Meanwhile, smaller investments – including in off-grid power – are attracting funds to sustainable business plans. Several ICA members canvassed for the annual report suggested there should be greater focus on mechanisms to generate smaller projects, “particularly in areas such as renewables where a strong flow of small-scale projects could make a big difference as off-grid technologies become increasingly affordable and practical solutions”.

The effectiveness of the African Renewable Energy Fund – launched in March 2014 with $100m committed capital to support small to medium-scale IPPs – “is being keenly watched by some members who say momentum is gaining in small-sized, sometimes distributed, power solutions”.

AfDB director of energy, environment and climate change Alex Rugamba said that, as well as accelerating mega-projects and regional integration “to efficiently serve a larger population”, the Abidjan-based bank was looking to act as a catalyst in off-grid electricity access. “We at the bank have not been very active [in off-grid], but we have no choice to participate in working on bottom-of-the-pyramid schemes,” Rugamba said, citing Kenya’s pay-as-you-go M-Kopa Solar as a model scheme (AE 297/28).

Hassan was positive about bigger international initiatives, including the Global Infrastructure Facility (GIF) launched in 2014, which “holds the potential to unlock billions of dollars… The GIF is designed to tap into expertise from within and outside the WBG to deliver complex public-private infrastructure projects that no single institution could address on its own.” He saw “this potentially powerful tool join[ing] forces with emerging instruments, including the innovative Africa50 fund that will help the continent to develop transformative and bankable projects”.

Central government budget allocations identified by ICA provided the largest category of commitments to infrastructure development in 2014, totalling $34.5bn (based on data obtained from 42 countries). The report said: “Substantial commitments may also be made to infrastructure at a subnational level – by local governments, utility companies and other institutions.” Notable projects in 2014 included $572m invested in Morocco’s 200km €1.8bn ($2.4bn) Tangier-Rabat-Kenitra high-speed railway line and $8.4bn raised via investment certificates sold to Egyptian citizens for the Suez Canal expansion.

African regional development banks, led by Development Bank of Southern Africa, committed nearly $2bn to infrastructure projects in 2014, a slight decrease on their $2.2bn commitments across the continent in 2013.
African Energy’s publisher Cross-border Information Ltd is consultant to the ICA Secretariat for the Annual Report, data collection and collation, including compiling data on national government budget allocations to Africa’s infrastructure and the African Infrastructure Investment Survey of private sector attitudes.

The above article was originally published in CbI's African Energy

Selected graphics from the 2014 report 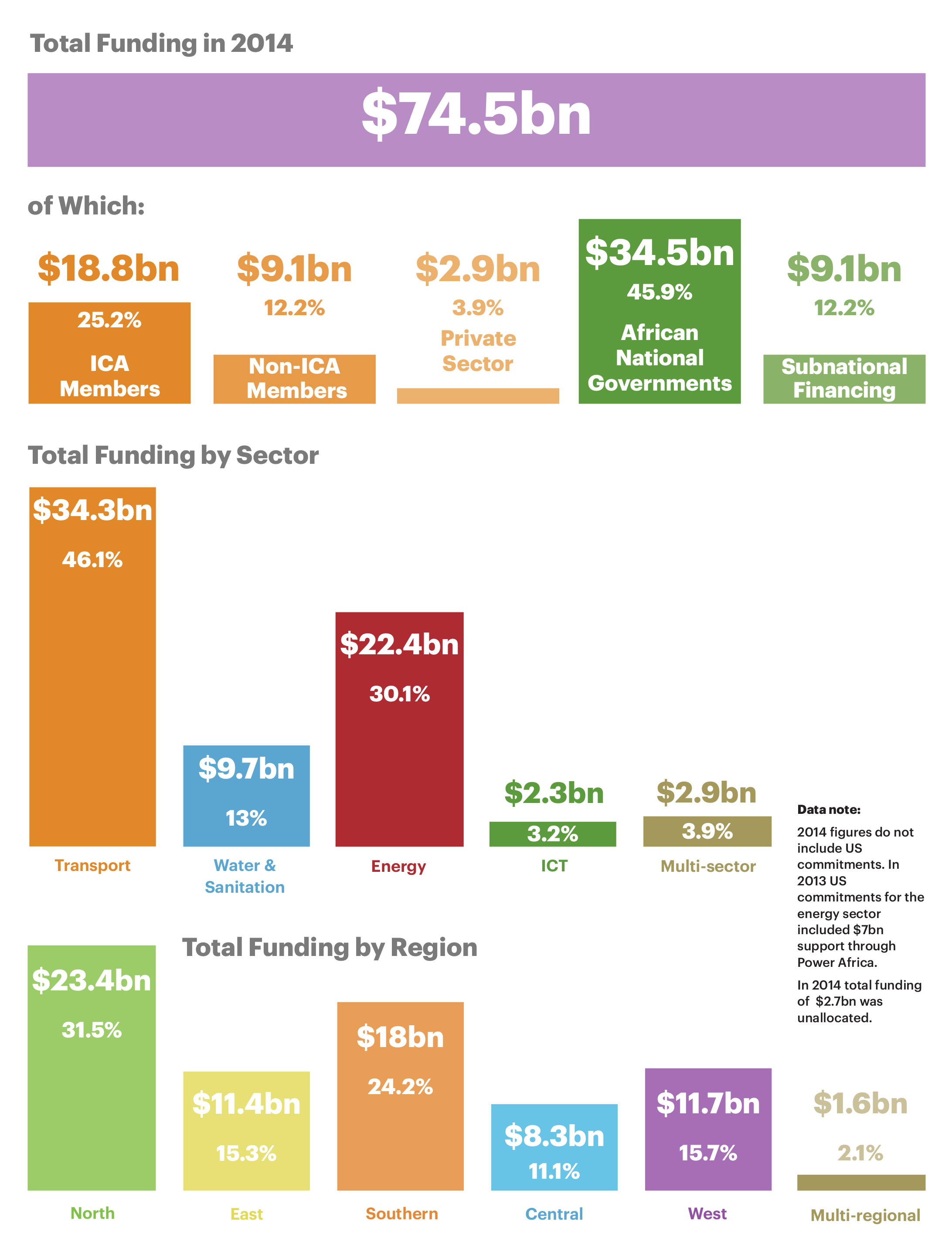 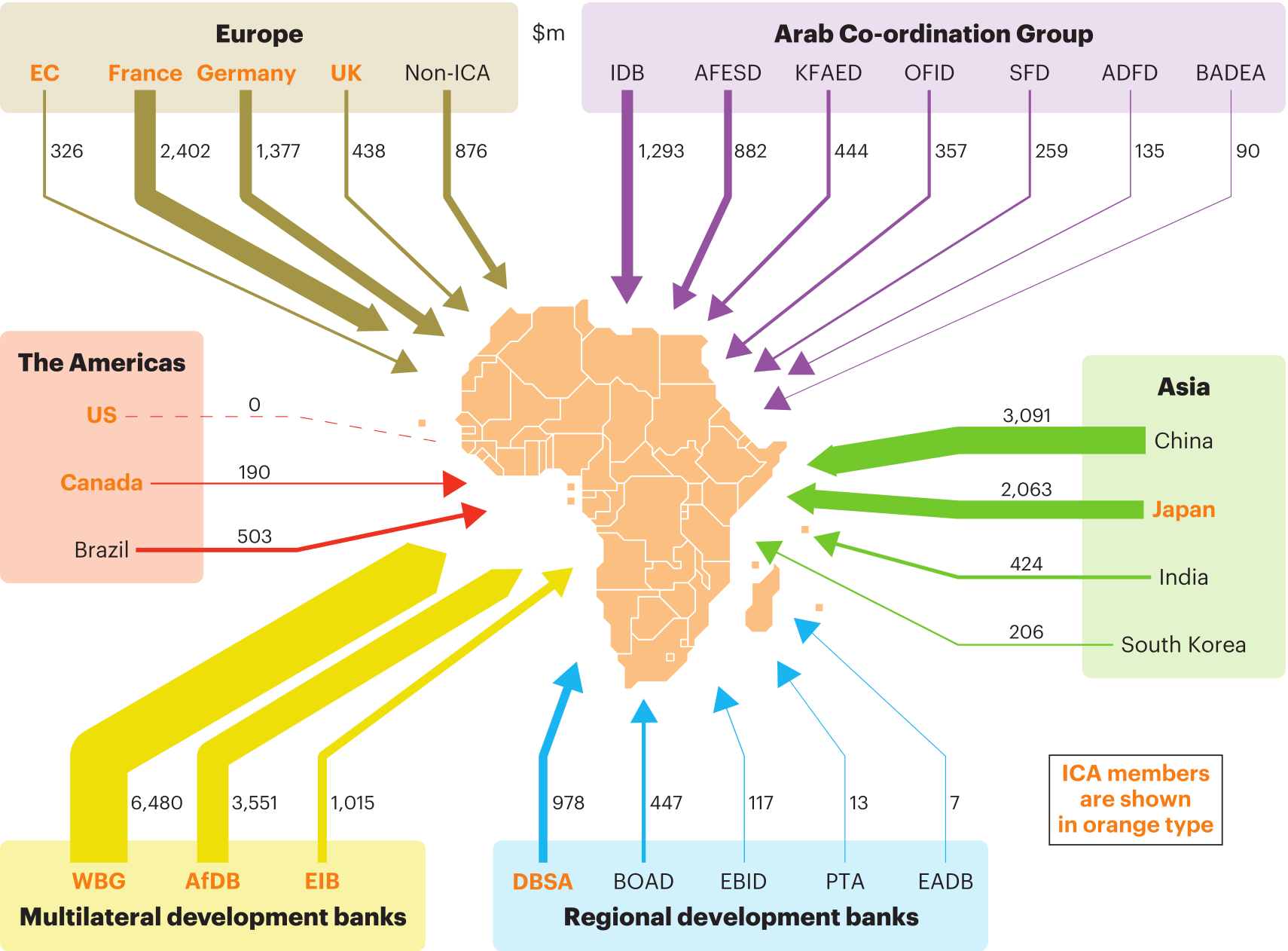